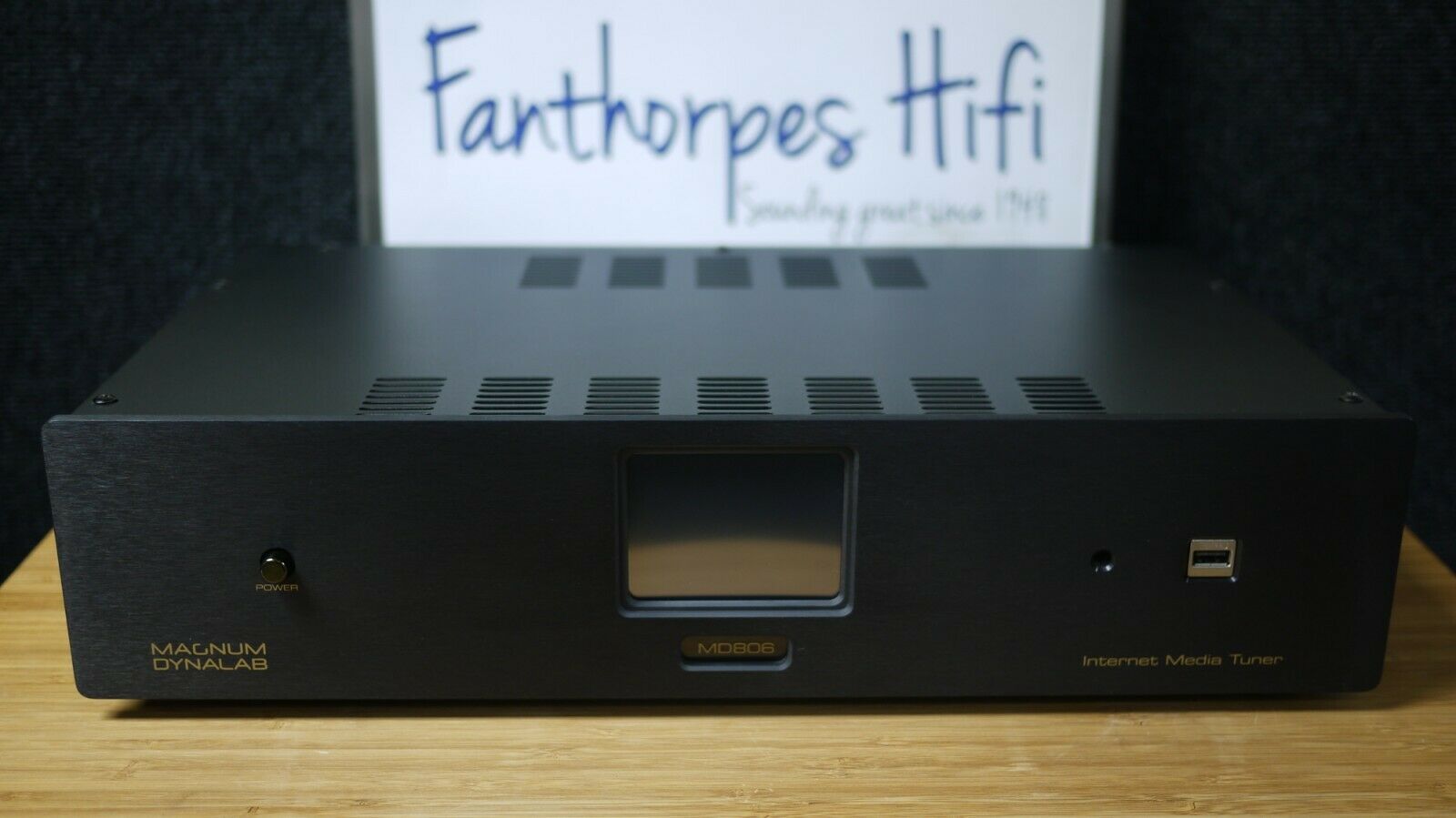 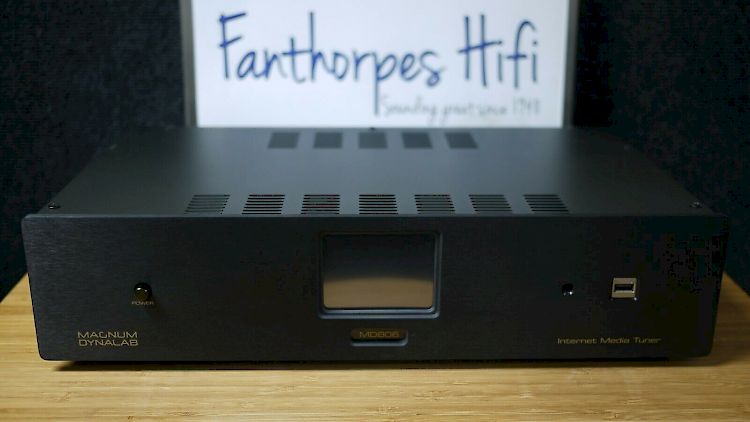 We have this preowned Magnum Dynalab MD806 Internet Media Tuner in Black. It is in very good condition. It comes with the original box/packaging, remote control & UK mains lead

The Mangum Dynalab MD 806 Internet Media Tuner is the fruit of the company's years of expertise in analog sound staging. It also takes advantage of Magnum Dynalab's proven development in D-to-A conversion technology along with innovative new software to unlock a near limitless amount to music. With access to over 20,000 Internet radio stations and the ability to uncover the true sound potential in your digital music collection, the MD 806 can be a premium staple among your collection of source audio products.

Sharing the same circuit topology that is found in Magnum Dynalab's MD 100T FM tuner, the MD 801's audio stage is more characteristic of products at much higher price points. At the centerpiece of this design are two Magnum Dynalab reference 6922 vacuum tubes in the output stage, delivering 100% of the gain in this full triode unit. The low impedance output helps eliminate the sensitivity to the type of interconnect cables used. It also helps to create the trademark sound that Magnum Dynalab products are known for.

Wima capacitors, Kimber Hyperpure wiring throughout the unit, gold-plated tube sockets, upgraded connectors and other components from world-recognized suppliers are all a testament to the overall build quality of the MD 806, ensuring long life and listening enjoyment for many years.

The MD 806 provides access to over 20,000 Internet Radio stations and podcasts via an onboard WiFi antenna or LAN. It also offers easy access to terrestrial FM and locally connected music collections in a variety of formats (including AAC, Real, MP3, FLAC and WMA).

Internet radio stations are neatly organized and searchable by various categories, including country of origin, genre, most popular, favorites. The touch screen display provides easy-to-read information on current track's metadata, genre, bit rate, codec, and sampling rate. Personal audio collections (attached via local network or USB flash stick/hard drive) are easy to navigate via artist name, album name, or genre. When connected to the Internet via your LAN, the software automatically connects to the host for the latest firmware updates.

With its high-quality 3/8"-thick faceplate, a stately 3.5" color touch screen, and a solid steel chassis, this tuner is built to last. The functional remote is also upgradeable to a metal encased touch screen remote (standard on the MD 809).

Like all Magnum Dynalab products, the MD 806 benefits from particular attention that has been paid to the grounding plane. The same unique grounding loop found in many of the company's top-end products is also designed into the MD 806. The result is a signal free of impurities that originate with the ground plane.

With its RCA and balanced analog outputs, the MD 807 will seamlessly integrate into any home audio system. The unit also comes equipped with optical and RCA digital outputs for use with an external DAC.

In developing its new line of Internet Media Tuners, Magnum Dynalab considered its many years in the FM tuner business. And with the introduction of various new technologies, including satellite radio and HD Radio, the company has taken a cautious approach to distributed audio. For years, Magnum Dynalab exclusively built terrestrial FM tuners, despite the myriad of alternatives being developed. But as the company's reputation for quality in FM developed, it also continued to experiment in our design lab.

It wasn't until 2004 that Magnum Dynalab took the first step towards embracing the various digital audio broadcasts permeating the industry. First with the World Source Platform in the MD 109, and later with the launch of its line of XM Satellite Radio Tuners, Magnum Dynalab developed expertise in D-to-A technology and was finally happy with the resultant signal and sound which it was able to achieve. This development led the company to experiment with other digitally distributed audio broadcasts and ultimately to a medium that offers the greatest potential for music lovers – the Internet.

With the variety in signal quality distributed via Internet music stations, not all broadcasts will produce CD quality sound. But they are out there. And there are more and more all of the time. With advances in DAC design and a growing number of high quality broadcasts coming on-line, Magnum Dynalab is energized by the potential that Internet radio offers and excited about its new line of Internet Radio tuners.