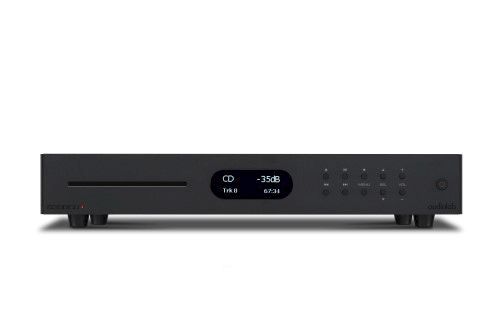 The 8300CD demonstrates a level of fine detail, transparency, soundstage depth, dynamic range and musical flow across all sources. It is both an exceptional CD player and a top-class external DAC/digital preamp, able to make the most of your CD collection. While delivering an enormous sonic boost to external digital audio sources it now extends its resolution to 32-bit/384kHz and DSD compatibility via USB.

Control Where You Need It

The 8300CD adds full digital preamp functionality, with volume and source selection accessible via the player’s front panel and remote handset. This means the 8300CD can be connected directly to a stereo power amp, or a pair of monoblocks like the new Audiolab 8300MB, as well as to a traditional integrated amp like the equally new Audiolab 8300A.

8300 Series also allows control of music playing from a PC/Mac/media device via USB. When connected to a computer, the 8300CD not only identifies itself as an asynchronous DAC, but also as a HID-compatible device (Human Interface Device). This allows driverless control of the PC/Mac/media player (Play, Pause, Stop, Track Select etc).

The 8300 series’ blasted aluminium finish, CNC routed aluminium dials and display certainly look cutting-edge, yet with every Audiolab product, form follows function. The new display and controls enable a fast and intuitive access through the vast routing options and filter settings in both the A and CD.

Our extensive research and development found that previous tray-style mechanisms sometimes produced a rare weak spot. The 8300CD sports a new mechanism that includes slot loading – much quicker and neater than the old tray.

The new mechanism also reduces the occurrence of disc rejection, able to play CDs that other CD players may reject for being imperfect from dirt or damage. Its digital buffer circuit is a perfect mate to the asynchronous input of the DAC, improving even this area of performance. A final benefit is increased disc stability and reduced susceptibility to resonance, which additionally contributes to the overall improved sound quality.

On the 8300A Engineers have developed a new phono stage catering for the resurgence in vinyl records with MM and MC configurations accessible via the front panel controls.

12V remote trigger loop feature on all units so as one device is switched on, paired units are switched into or out of standby mode - working as one system for quick operation.